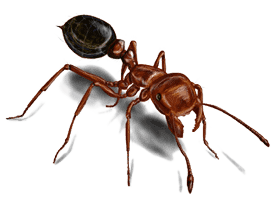 The Red Imported Fire Ants are an invasive species and do not have natural enemies.

Several species of ants infest homes and businesses from time to time. Ants are colony-forming insects. You can easily recognize ants by their constricted waists. Some ants have wings and can be confused with termites. Termites do not have the thread-like waists found in ants. The abdomen of the termite is broadly jointed to the thorax. Several different species of ants are found in the Charleston area of South Carolina including:

In the development of ants, four stages are found – egg, larva, pupa, and adult. Only workers are generally found in houses. The colony is founded by the queen soon after mating. After much nursing, the workers mature and help enlarge the colony and feed the queen.

Some ant species are closely associated with plant lice and scale insects which secrete honeydew. Sweets attract some ants while greasy foods attract others. Trails of ants may be found at times extending from the directly from the nest to a food supply.

Ant nests may be found in the ground, in house timbers or even in twigs. Most ants breed outdoors and then come into the homes where they cause most of their annoyances.

Nature of Damage or Annoyance

Household ants are mainly annoying, though some of them are capable of damaging woodwork. Some species sting and others, particularly the Argentine ant, annoy by biting. Once inside the home, they can ruin much food, and they can possibly transmit diseases organisms to food which they contact. Some fire ants may injure textiles by feeding on the soiled portions. Even indoors some species attend and care for honey dew-secreting insects, protecting them from their natural enemies and thereby increasing the ability of these pest to injure plants. 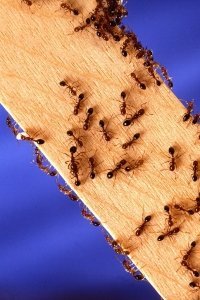 The Red Imported Fire Ant is the most common fire ant in South Carolina.

The outdoors can be the best part of your home. Unfortunately, some pests might not let you enjoy your own yard.

One of the biggest pests in the coastal yard is the Red Imported Fire Ants (Solenopsis invicta). These ants have a painful sting to humans and to animals such as birds, chickens, pigs and calves.

Our specialized pest control technicians can treat your lawn to control ants, fleas, mole crickets and other common Lowcountry pests. In most cases, spring through summer is the ideal time to have the lawn treated.

We can treat yards for fire ants and protect your family and pets from these pests.

Request Estimate!
Page load link
We use cookies and similar technologies to recognize your repeat visits and preferences, to measure the effectiveness of campaigns, and improve our websites. For settings and more information about cookies, view our Cookie Policy. By clicking “Accept” on this banner or using our site, you consent to the use of cookies. ACCEPT