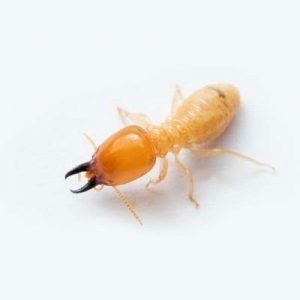 The Formosan termite is a subterranean species and is the most aggressive and destructive termite to homes and buildings in South Carolina. It’s important to know the type of termite encountered as methods of treatment can vary from species to species.

Once we treat your home, we’ll inspect the house or building structure once a year. We may be the only inspector at your home annually and we’ll not only look for actual termites or termite activity but also issues that may contribute to moisture and termite problems.

Homes in the Charleston area commonly use a concrete “slab” for a foundation. A slab foundation home uses a 4 to 6-inch concrete base with no underneath crawl space. A layer of sand is often used under the concrete to help with drainage.

Many slab homeowners believe that termite control isn’t necessary or required for homes built on a slab. However, subterranean termites live and travel underground and still find ways to destroy wood through the concrete pad. Termites can even enter the structure through cracks in the cement and plumbing and utility entry points.

Barrier Pest Services understands the importance of termite control, extermination and prevention in homes built on a concrete slab. For a slab home or homes with an inaccessible crawlspace, we inspect all areas of the ground floor and the home’s exterior. We can provide an environmentally safe plan of action and custom solution to address any termite issues.

How to Treat Termites in a Crawl Space

We inspect the crawlspace, the interior of any slab areas, and the home’s exterior for crawlspace homes. Inspection of the crawlspace includes identifying any leaking pipes or ductwork and other problems. We’ll also check the moisture content of the wood members in the crawlspace. We provide a detailed inspection report on every visit, as well as any recommendations.

The Best Termite Bond & Protection Warranty in the Business

How to kill and get rid of Formosan termites

Termite treatment and termite extermination have changed dramatically over the past 20 or 30 years, and the number of application techniques and products has tripled in the last ten years.

Barrier Pest Services uses the best products to control and exterminate termites in your home or business. There are approximately 200 pest control companies in the Charleston area, and the warranties (or termite bonds) vary significantly from one company to the next.

Termiticides have come a long way. In the past, all termiticides had a strong odor, and termites could detect the product. They would often enter through gaps in the chemical barrier to infest the home. We are proud to offer Termidor termiticide to treat and exterminate termites in existing homes.

Termidor is remarkable in its composition that is odorless and undetectable to termites. It is useful for preventative and remedial treatments. Termidor is a long-lasting product that has proven its capabilities against Formosan termites. Termidor also has a reduced application label that allows less product to be applied.

For many years, liquid termiticides were the only treatment option for exterminating subterranean termites. Released in 1995 by Dow AgroSciences, termite bait stations were introduced as an alternative to liquid termite control. Baiting systems take advantage of the termites’ biology and behavior and are installed around the home’s exterior perimeter or building structure.

The termite bait is most often made of paper, cardboard, or a sawdust-like material that contains the ingredients to kills termites. As the termite feeds on the bait, they will go back to the colony and infect other termites as they provide food to others. The termite bait’s impact is not immediate as the insecticide is designed to be slow-acting and contains “insect growth regulators” so that the bait can be spread to other colony members, including the king and queen.

Bait systems must be monitored and maintained regularly to be most effective. Barrier Pest Services offer Advance Bait Systems in conjunction with an exterior Termidor treatment. We usually recommend this two-fold treatment if the home or structure has an inaccessible crawlspace or slab foundation as a complete liquid treatment would not be possible due to construction design.

Termites are a small, soft-bodied insect with short antennae with strong mouthparts used to chew wood, seeds, leaves and other cellulose-containing material. Termites range in color from white to light brown and are typically between 1/4 and 1/2 of an inch long. The main difference between termites and other insects is the antennae and the waist. A termite has a straight, beaded antenna and has no waist.

Scientists have identified approximately 2,800 termites species around the world, including about 45 in the United States. Termites are widely distributed throughout the tropical and sub-tropical regions, close to the equator, while other species live at higher altitudes.

Termites live in organized colonies developed around a nest system where labor is divided between reproductives (kings, queens and nymphs), soldiers and workers. Within a colony, hundreds, thousands and even millions of termites work and live together. Termites will share with each other food, water, and even droplets of fluid to help keep themselves supplied with tiny organisms for digesting wood. In addition to wood, termites can eat papers, dead tree roots and mulch.

What’s the difference between a termite soldier and a termite worker?

Soldiers are responsible for defending the colony. Their large heads and highly modified, powerful mandibles are used to protect the colony against many predators such as ants, spiders, reptiles and amphibians. The heads and mandibles are so large that termite workers cannot feed themselves and are fed by the worker termites.

Worker termites take on the most labor and are the main caste(or group) of the termite colony. They are responsible for searching and gathering for the termite colony, maintaining the colony’s pheromones, tending to the eggs and nymphs, taking care of the queens and kings. They are also responsible for building or repairing the nest, tunnels, and feeding tunnels. Termite workers are the first to emerge from the eggs and shake while in the queens and kings presence.

The termite queen is responsible for producing eggs for the colony and unlike ants, the king will mate with the queen for the entire time of the queen’s life.

Request Estimate!
We use cookies and similar technologies to recognize your repeat visits and preferences, to measure the effectiveness of campaigns, and improve our websites. For settings and more information about cookies, view our Cookie Policy. By clicking “Accept” on this banner or using our site, you consent to the use of cookies. ACCEPT